Right-hand drive SUV based on Geely Boyue to be named Proton X70. No price or launch date announced but more official details have been released by Proton 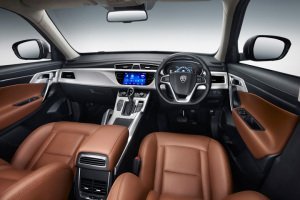 Proton has announced that their new SUV will be called the X70. The designation marks a new naming convention for Proton. As Geely is moves into the right hand drive market, an alphanumeric name is more readily accepted internationally and avoids the embarrassment of names with unfortunate meanings in other cultures. The first batch of X70s will be assembled in China as the production line in Malaysia is being set up. Malaysia will be Geely’s centre for the right-hand drive market.

The X70 is Geely’s first right-hand drive model. Its transformation from Boyue to the X70 isn’t just in appearance but also in its engineering. More than 70 vehicles were tested over 75,000 man hours on Malaysian roads to tweak the handling and suspension for local conditions. The design work was led by a Malaysian team which relocated to Shanghai to work with the rest of the Geely design teams working on the various other brands in the Geely portfolio. The inspiration for the external elements of the X70 was the Malayan Tiger, for its muscular silhouette and the styling of the headlights with Daytime Running Lights to resemble tiger eyes.

The new flagship Proton, the X70 will be powered by a 1.8-litre turbocharged, direct injection petrol engine with a six-speed automatic gearbox producing 180bhp and 285Nm of torque. The SUV has active all-wheel drive with front-wheel drive bias. There are two trim levels: Luxury and Executive. Nappa leather seats are offered with two interior colour schemes, black, and black and tan with brush aluminium highlights. The higher spec Executive comes with a panoramic roof.

The instrument panel is digital and configurable. A new feature, a first for Geely, is Voice-activated Controls, tailored to Malaysian English (whatever that is supposed to mean). Voice samples were taken from the Malaysian engineers on the X70 project to create a vocal database for local English support.

Proton will start taking pre-orders for the X70 from Saturday 8 September at any of their 3S and 4S outlets. No price has been announced yet, nor an official launch date.

Proton’s media briefing on their first-ever SUV was tightly-controlled: no photographic equipment was allowed into the briefing room and the media had to relinquish their mobile phones which were placed in sealed envelopes and returned after the briefing, hence the paucity of photos of the actual car. The renderings were the only images provided by Proton.