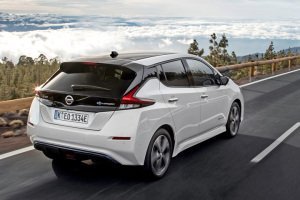 So that’s why it’s spelled out in block capital letters on all the billboards: because the name of the world’s best-selling electric car – the Nissan Leaf – is an acronym. Turns out they didn’t just name it in honour of Carlos Ghosn’s favourite rubber tree pot plant, after all.

This car is Nissan’s ‘Leading Environmentally friendly Affordable Family vehicle’. Of course it is. And while it takes a bit of a fudge to turn that into the acronym in question (‘LEFAFV’ doesn’t have quite the same ring), the contrivance neatly conveys the car’s central truth: that any Leaf must be more practical, more convenient, better value and easier to operate than any other electric rival. And yet it must also be market-leading: popular in one sense, innovative and pioneering in another.

Thus far, it’s been fairly straightforward for Nissan to define the Leaf as the ‘leading’ EV because, well, they’ve sold a quarter-of-a million of them. Looking towards a fairly near future with electric Hondas, Toyotas, Volkswagen IDs and Teslas in it, however, ‘market-leading’ status may be a tougher ask. Still, it’ll be the fibre of this car with which it’ll be aiming to claim it: the second-generation Leaf, complete with sharper looks, more power, more battery range, better onboard technology – and a value-for-money proposition that isn’t to be sniffed at.

Having increased this car’s battery range by 50%, motor power by 40% and torque by 25%, Nissan has actually reduced prices on the Leaf by up to £1500, depending on trim level. Granted, the car still relies on the UK treasury’s £4500 buyer incentive to make good its business case. But taking that deal into account, the bottom-rung Leaf now comfortably beats an entry-level combustion-engined Audi A3 Sportback on power, performance and list price.

Where the Leaf falls down when compared with the proper premium-branded mainstream hatchbacks against which it’s priced continues to be inside. The car’s driving position is improved but still feels oddly perched (because you’re sitting, even up front, directly above the drive battery) and still lacks telescopic steering column adjustment. Perceived cabin quality’s a shade improved from the outgoing car’s but it’s still way off where it ought to be for the price.

Driving the Leaf is suggestive of greater premium-level refinements, though. Being as brilliantly responsive to the accelerator as ever, and having greater torque-related thrust below about 50mph than just about anything short of a hot hatchback, the Leaf is a delight to drive around town. Nissan’s powertrain improvements make it feel much less out of place on the motorway than the old one did. There’s a new ‘ePedal’ setting for the car, which filters in strong regenerative braking before you go anywhere near the brake pedal, and makes the Leaf at once easier to drive and better at recycling energy than the old one. And, perhaps more striking than everything else, this is now a seriously quiet and refined car.

The Leaf is based on an overhauled version of the old car’s mechanical platform but, having been made torsionally stiffer than its predecessor as well as quicker-steering and more resistant to body roll, it feels both comfortable-riding and agile-handling on the road: enough in both cases, certainly, to satisfy most tastes. There’s well-tuned weight and return-to-centre springing about the steering too.

Even in light of all that, though, while the original Leaf wasn’t a car an interested driver would pick above its rivals, the new one probably isn’t either. Those who choose a Leaf will continue to do so for rational reasons: it’s better-priced than its opponents, better-supported by relevant public fast-charging infrastructure – and it now has the battery range to be more usable than before. At an NEDC-certified 235 miles, the new Leaf’s cruising range beats that of every rival save the priciest Renault Zoe (250 miles) and the Opel Ampera-e (323 miles, though still denied to UK buyers). In mixed real-world use, our test drive suggests you should expect more like 160-170 miles from this car between charges. And, relative to the claim, that may sound like a con – but it’s actually quite impressive for what remains one of the juvenile EV class’s value champions.

Tester’s Note
The ‘ePedal’ throttle calibration is clever and makes the Leaf easier to drive than its predecessor. I miss properly adjustable coast/regen settings, but Nissan’s market research suggests they’re too complex for Leaf owners. MS