The reborn Stratos will be placed into limited production by bespoke sports car specialist Manifattura Automobili Torino (MAT), which has confirmed plans for three versions of the new two-seater: a road car, GT race car and safari rally car.

The modern-day Stratos – a homage to Lancia’s legendary sports and rally car, of which 492 examples were built between 1973 and 1978 – was first unveiled in concept form in 2010.

It was commissioned by billionaire German entrepreneur Michael Stoschek, who is chairman of car parts supplier Brose and a rallying enthusiast.

The design of the new car is credited to Pininfarina, whereas the original Stratos was the work of Bertone. The mid-engined design features the wedge profile, semicircular windscreen, side tanks, removable front and rear servicing hoods and engine-access hatch of the original.

The concept version of the modern-day Stratos was based on a cut-down aluminium spaceframe structure from a Ferrari 430 Scuderia and used that car’s drivetrain. However, in 2011, Ferrari blocked Pininfarina and “any other Ferrari-dependent suppliers” from putting the new Stratos into production, prompting the car’s designers to look elsewhere for a base.

MAT’s announcement doesn’t give any technical details of the production version of the new Stratos, but it does say it has obtained from Stoschek “permission to replicate the New Stratos using the same design and technologies of his car”.

The announcement adds: “The base platform that MAT will use will allow the creation of a GT racer, a Safari version and a competent supercar for the daily use.”

The new car has similar dimensions to the original, 3710mm-long Stratos, with a similarly short wheelbase, and is claimed to have a “lightweight design”. The concept had a kerb weight of 1274kg.

The only detail revealed about the mechanicals so far is that the engine produces 542bhp and pictures show the steering-wheel-mounted shift paddles of an automatic gearbox. The concept’s Ferrari-sourced 4.3-litre V8 produced 532bhp.

The new Stratos’s stripped-back interior mirrors many features of the original’s, including an integrated roll cage and door compartments for driver and passenger crash helmets.

Stoschek said: “I am delighted that other passionate car enthusiasts will be able to experience how the successor to the most fascinating rally car of the 1970s still sets the bar for design and performance.”

No price for the new Stratos has been revealed, although a figure of around £600,000 was mooted when Autocar first reported on the concept.

MAT’s portfolio includes the Apollo Arrow and Scuderia Cameron Glickenhaus SCG003S. The company, which designs, engineers and builds one-off and limited-production luxury and racing models, is headed by its founder, Paolo Garella, who previously worked for Pininfarina and has been involved with more than 50 bespoke car projects.
KRIS CULMER

THE CONCEPT SHOWED REAL PROMISE WHEN WE DROVE IT 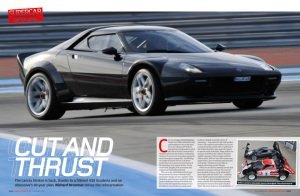 Back when the new Lancia Stratos was just a concept, a mere [cough] eight years ago, Autocar’s Richard Bremner got behind the wheel of it at the Paul Ricard circuit in France. Even then, it had been 10 years in the making and was finally realised by a group of enthusiasts and design house Pininfarina.

Bremner described his first few moments behind the wheel: the steering “swivels slightly more lightly than expected, but with an oil-smooth action that’s totally free of slack”. The rest of the car matched that intent, “the carbon nose turning with the obedience of a fear-drilled army corps”.

It wasn’t long before Bremner hit a long-curved corner, which revealed “a hint of how agile this stealth-black weapon might be”. He concluded that it’s hard to imagine there being no demand for a car “so stylish, so polished, so complete and a car that is such a brilliant recreation not only for looks but handling character besides”.

At the time, Pininfarina said it could build 25. Pininfarina is no longer in the picture, but if MAT can achieve the same final result, it’s very good news.