A streamlined range, more tech and updated looks: the new Mercedes-Benz C 300 AMG Line goes to the top of the class 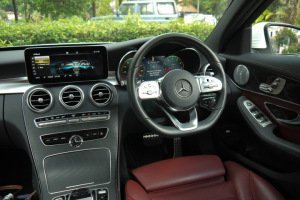 What is it?
Less is more, said Mies van der Rohe and he would have approved how Mercedes-Benz streamlined the C-Class lineup in the midlife refresh. The C 180, the multiple trim levels of the C 200 and C 250 and plug-in hybrid C 350 were whittled down to just two non-AMG variants: the C 200 Avantgarde and the C 300 AMG Line.

He may have been more with the changes introduced in the C 300 which has a new nine-speed automatic gearbox and, latest generation four-cylinder 2.0-litre engine which is considerably more powerful. The output has gone up from 211bhp to 258bhp and maximum torque upped by 20Nm to 370 but at higher, 1800rpm . The zero-to-a-hundred time is down by 0.6 seconds which has led to an increase in fuel consumption of 1.2-litres per 100-kilometres. In the real world, that’s a negligible dent on the pocket but could make the difference between first and loser in a drag race.

What is it like?
When the W205 C-Class was launched, it was described as a mini S-Class and was the most technologically advanced, safest and most luxurious in its class while exuding old-world elegance, sophistication and finesse.

Fast forward to 2019 and the C-Class facelift is still the most tech-filled, safest and the most luxurious in its segment: air suspension, new interior materials, updated features, customisable interfaces and the latest driver assistance from the S-Class. The new C 300 has the added wow factor of the aesthetically-pleasing diamond grille, hulking great 19-inch rims, new front and rear bumpers, LED intelligent head light system and redesigned LED tail lamps which make it more stylish, dynamic and sporty-looking than the pre-facelift. There’s also a new feature, a ride height elevator, that’s part of the air suspension. It’s supposed to raise the undercarriage by up to 15mm to prevent damage when going over rough roads. We tried to use it for another purpose, add millimetres in hopes that it would make it easier to reach the ticket slot at the car park entrance. It didn’t.

Previously only in the C 350 e but now standard in the C 300 is the Airmatic self-levelling suspension: electronically-controlled, independent damping at each wheel. There are also five Dynamic Select options to define how the suspension, engine, and steering work together in response to the driver’s foot or road conditions, customisable every time the driver got into the car but, we left it in the default Comfort mode.

Comfort mode sounds leisurely, and we anticipated needing to put in some heavy peddle work but the C300 was not lethargic. It had a decent amount of muscle in its performance without having to get into Sport mode. The cabin was well insulated and noise intrusion was limited to sounds coming from the tyres.

The decision to kit out the C300 with 19-inch rims and low profile tyres would appear to have prioritised hot looks and performance over comfort but the ride comfort has been improved in the facelift. Also, despite being able to hear the tyres at low speeds, the bone jarring ride we anticipated as we picked up speed didn’t materialise. The air suspension kept the passenger experience smooth and well-cushioned, as my 85-year old passenger can attest.

Also surprising was the engine note. No one would accuse four-cylinder mills of being naturally melodious – and the C300 doesn’t appear to be the beneficiary of any audio trickery – but the M264 engine had a very attractive low pitch which on the highway. When we opened up the throttle, it was just loud enough to fade out the sound of rubber-shod clogs on tarmac.

Keyless entry has been added to the C300. The cabin design was elegant in 2014 but but now look dated in comparison. The swathes of shiny-shiny black have now been restricted to a few switches and small surfaces, the new glass-topped ignition button, satin aluminium and matt black open pore wood fascia has rejuvenated the interior and also upped the air of expensiveness. Our test car had racy red leather on the seats and doors but black and tan leather are more muted alternatives.

The four or five Ambient lighting colour options have been expanded to a whole rainbow (and every shade in between) light display and adjustable brightness.

The infotainment monitor is new and noticeably bigger at 10.25-inch. Both the monitor and the instrument cluster are LED with options to customise the digital displays in three styles. All the functions can be accessed either through the Comand touch pad or tactile buttons on the new steering wheel. Smartphones can now be connected to the infotainment system through Apple CarPlay or Android Auto so selected apps can be mirrored on to the big screen.

There’s a long list of new/improved collision avoidance safety tech in the latest C, most of which are from the S-Class. With far too many to mention in detail here, we picked three for special mention: Active Brake Assist, Blind Spot Alert and Active Lane Keeping Assist with Steering Correction.

Active Brake Assist warns the driver that they’re are getting too close to the car in front and applies the brakes if the driver doesn’t. If the driver doesn’t brake hard enough, the system will apply more brake pressure to reduce the force of the impact if an accident can’t be prevented. Great for drivers who don’t understand the concept of braking distance.

Lane Keeping Assist has evolved into Active Lane Keeping Assist with Steering Correction. In the earlier version, the steering wheel would vibrate if the driver drifted out of their lane without indicating. The new version is fancier: it’s capable of taking action autonomously. If the driver doesn’t move back into lane, slow down or put on the indicators, when the alert is sounded and a red triangle flashes in the wing mirror, the brakes are applied autonomously on one side to pull the car back into its original lane.

Should I get one?
If you are planing just getting a C-Class then our advice would be to save the RM46,000 and get the 1.5-litre C200 instead. You get the badge and almost the same safety features except for steering correction in the Lane-Keeping Assist. It’s pointless spending the money on the C300 when you’re not going to enjoy the power, handling and gadgetry at the driver’s fingertips.

However, if you really want to enjoy a great drive every time you get behind the wheel, then the C300 is the one for you.

Tester’s note: you wouldn’t think Ambient lighting was anything more than a “nice thing to have” until you see how it’s done in the C300