The Beetle has been with us for 81-years and despite not being in production anymore, the Volkswagen Beetle 1.2 TSI is still a very desirable car.

The 2019 Volkswagen Beetle 1.2 TSI is a car which you can recognise from every angle you look at it. Some love it, some may not. The 2019 Volkswagen Beetle nameplate has been around for 81 years on the face of the pale blue dot. Throughout its lifetime, Beetle survived World War II, lived through the cold war and saw the reunification of Germany, as well as becoming a movie star and a local urban legend.

Sadly, Volkswagen had pulled the plug on the current-generation Volkswagen Beetle 1.2 TSI last year. And as with all good things, they will have to go whether how badly we want things to stay the same. However, it is still on sale. Brand-new. More on that later. The Volkswagen Beetle is recognisable from a mile away. And I feel it is not worth the trouble to explain how recognisable and iconic the Beetle’s design is. Besides the Porsche 911, you could compare it to the Coke bottle, or the Campbell soup label, or the Marmite bottle, to name a few iconic household items. But what has changed more recently are the bumpers and the exterior illumination.

These come in the form of projector Bi-Xenon headlamps with daytime running lamps. Meanwhile, the Volkswagen Beetle’s fog lamps at both ends are a standard feature as well. While the rear combination brake light clusters are illuminated by incandescent light bulbs, except for the LED rear fog light. Also, the Volkswagen Beetle comes fitted with newer 215/55 R17 ‘Rotor’ alloy wheels.

It may be a fashionable car, but it is very practical to live with. Harking back to the classic, the 2019 Volkswagen Beetle 1.2 TSI features interior inserts in exterior colour. The Tornado Red panels on the dashboard and door cards are not only unique to the Beetle but they’re easy to clean up as well. 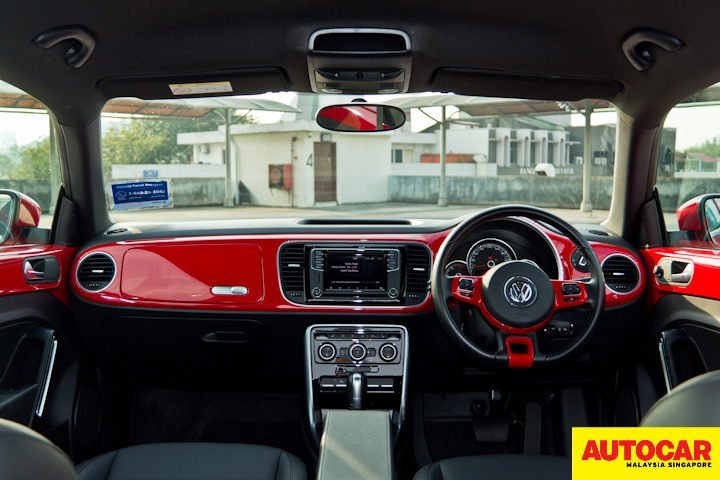 When it comes to tech, the Beetle is rather simple. It comes with automatic dual-zone climate control, and a 6.5-inch Composition Media touchscreen with MirroLink, Android Auto and Apple Car Play. Also, not forgetting the USB port and a 12v socket. Regardless, the smartphone integration system does come in handy when driving, especially when finding your way around unfamiliar places through Waze while listening to your favourite podcasts on Spotify.

Speaking of simple, the front seats are six-way mechanically adjustable on both sides. And the 50:50 foldable rear seats can only seat two persons. But why the mechanically adjustable seats, you might ask? The answer is, well, simple. They’re lighter, doesn’t draw additional power, will less likely to fail in decades to come. Also, it is quicker to readjust the seats after sending the Beetle for a wash.

The Beetle can sit drivers of many builds and sizes. The driving position places the driver upright without being overly perched up at its lowest height setting. Moreover, the rake and reach adjustable steering column is a big plus for drivers who prefer having the steering wheel further away or closer to their chests. The buttons and dials on the centre console are within arms reach. 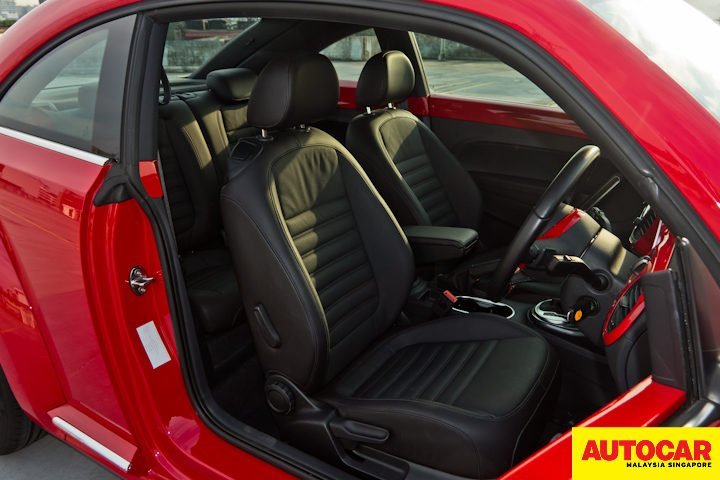 For a two-door car, the Volkswagen Beetle 1.2 TSI is actually a very practical car. There are two cup holders at the lower centre console, thick elastic door straps, two glove boxes, a dashboard top-shelf tray, a cubby at the roof console and a foldable centre armrest with a storage cubby. Moreover, there are two sun visor vanity mirrors with illumination on each side.

In terms of boot space, the Volkswagen Beetle’s boot space measures at 310-litres, and folding the rear seatbacks forward extends the number up to 905-litres. Furthermore, when there aren’t any passengers at the rear, the rear footwell is wide enough to fit groceries of 10 items or less each side. 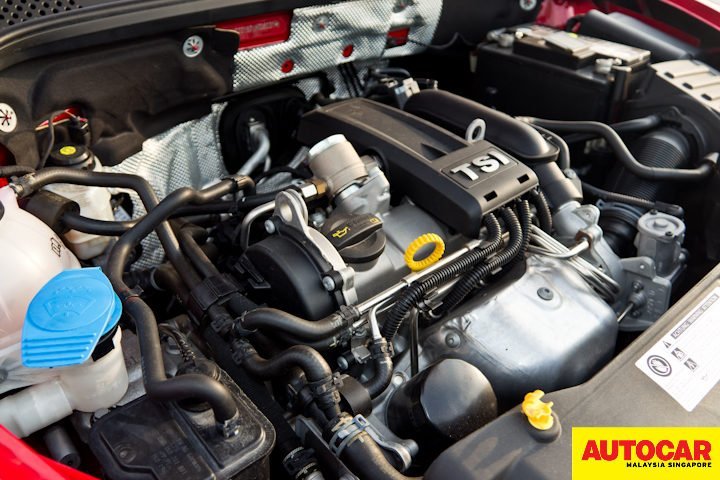 Despite being small, the 1.2-litre engine is impressively frugal; as tested, the Volkswagen Beetle 1.2 TSI clocked*:

When driven frugally, the 55-litre fuel tank can — in theory — take you up to 720 km, which the Beetle rewards frugal and mindful driving. This is because of the 1.2-litre engine’s low-end torque drives the car mostly and simply by leaving the engine and transmission to their own devices is the quickest way up to the Beetle’s 180 km/h top speed. 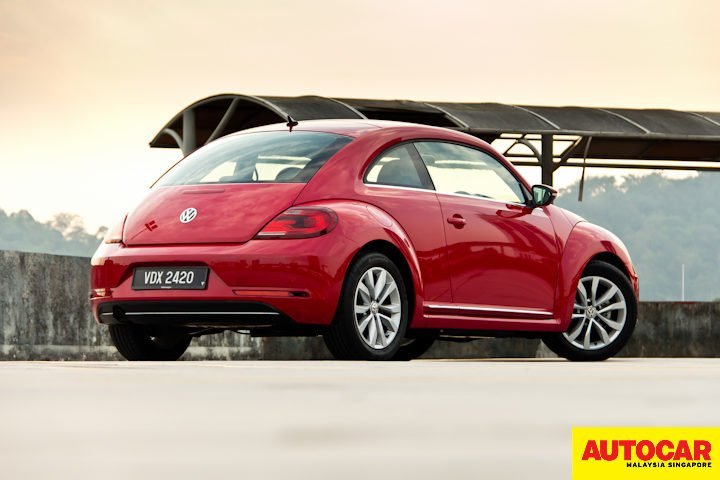 The Volkswagen Beetle provides an isolative ride quality. Moreover, the Continental ContiPremiumContact 2 tyres provide adequate traction and absorption from the surface irregularities. Inside, the wind and road noise doesn’t interfere much with the driving experience, but the engine would make itself heard when it is under load.

Handling wise, the Volkswagen Beetle is agile with a good footing on the road. Although the brake and tyre combination doesn’t seem like much, they’re more than adequate to keep the Beetle’s 1,300 kg weight from deviating away from its path. And despite not being able to feel much from the steering wheel, the Beetle doesn’t feel overly snappy or busy. It is truly a fun car to drive.

Should I buy one? 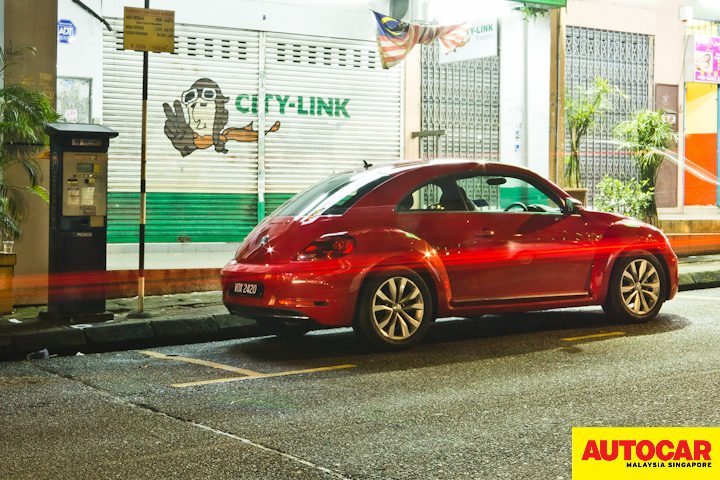 What is needed to know is that Volkswagen Passenger Cars Malaysia (VPCM) informed us that there are 50 units on their stockyard when this article at the time of writing this article.  And as of 1 June 2020, there will be a new tax policy implementation on CBU vehicles. This means that the prices of all imported vehicles will see a hike in prices. As for the Beetle, however, the RM152,390 price tag will be unaffected.

Tester’s Note: Despite being at the end of its life cycle, the Volkswagen Beetle 1.2 TSI is surely an icon worth driving and keeping over a long period of time. Moreover, the standard equipment fitted could probably last for another decade or so. We give it four and a half stars for its simplicity, practicality and frugality while looking good when driving a future classic.

The latest Mazda C-Segment saloon is a glimpse of what is to come from the company in the near future. But can the new Mazda 3 justify its hefty price tag? Mazda, the lovable and […]

Savings on 2018 models and special promotions on batteries and tyres for Chinese New Year Looking for a new car for the new year? Volkswagen may have just the deal for you with savings of […]